When Kids Are The Drivers, The Ride Is Worthwhile

This is a story about one of those entrepreneurial skilled teachers who wants to do more for her students. Meet Timea Kabai, organiser of a few events in Romania.

Miss Kabai is one of those entrepreneurial skilled teachers who wants to do more for her students. In 2015 she initiated the school’s first magazine on informatics and technology, which involvied her students and graduates contributing by writing articles and providing additional content for the magazine.

When an opportunity to participate in the Meet and Code became available in 2018, she knew this was a chance she couldn’t miss, so Miss Kabai applied for the funding of two events.

One event, Scratch&Robo involved 29 seventh grade students building a maze with Scratch followed by a training on how to build with LEGO Mindstorms EV3 Kit. 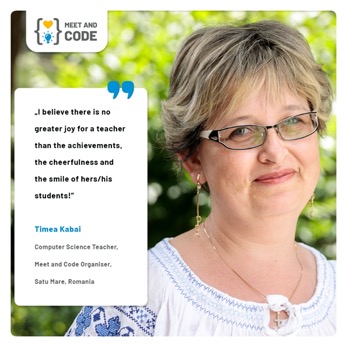 The second event was called CNIS Kick&Code, which took 40 students from the tenth gradebuilding an application that displayed realtime stats during a live football game.

The students gained confidence when seeing the result of their work. They appreciated each other's contribution and were very happy to became creators of products and technology, instead of playing the consumers role.” – says Miss Kabai.

What a Way to Kick-off!

Miss Kubai noticed the high involvement of students in applied informatics and their enthusiasm for learning technology that enables the creation of something useful. This led her to apply for and be accepted to Predau Viitor (Teaching the Future), the first accelerator in teaching computer science in Romania developed by Asociația Techsoup.

With the grant funds she received as a result of her committed participation in all aspects of the Predau Viitor Accelerator, she started R0b0Te@ch4Future - an Internet of Things club for tenth graders from the math and computer science tracks.

For 6 months, students have documented various Internet of Things devices and smart homes, and have learned to program with Arduino to create their own home-based sensors. They created a smart house model, and together with the SmartHouse app, they won the third place at the national contest of the Scientific Creativity Olympics, which took place in June 2019. 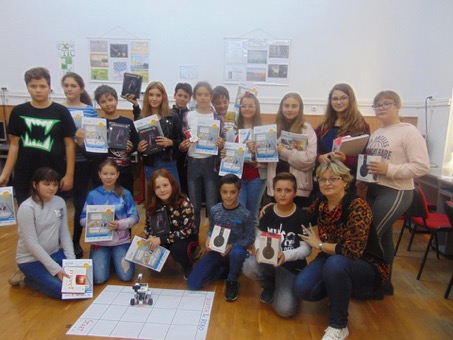 These wonderful children I had the opportunity to work with came to the club during their free time, on weekends and holidays and worked until the latest hours of the night. I never asked them to come, I never even suggested students stay as late as they did, but my Info lab was always full of hard working hands and clever minds. a teacher from Satu Mare