“We wanted to give young people the chance to do something different. The project took longer than we expected and was more difficult, but the students are still enjoying the experience, and we are now planning a robotics project together, starting in Autumn 2019.” — Peter Chandler, Trustee of the Globe Library in Stokesley which hosted a Meet and Code 2018 event 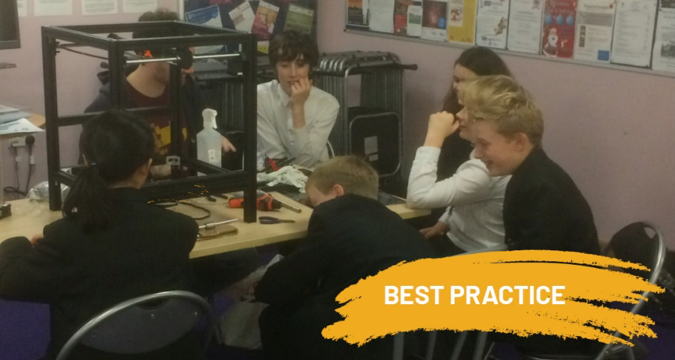 The initial idea was mine. I don't think I realized how hard it would be. As well as the technical issues, I have learned lot about working with and motivating young people. I thought it would be easy! Mark Jenkins, Edinburgh University Informatics Graduate

The employees of the Globe Library in Stokesley, inspired by a local IT enthusiast, were thinking about building a 3D printer from scratch. But they had no money to do it. A Meet and Code grant of Euro 500 allowed them to buy the parts to begin building the printer and involve local youth in the project.

Peter Chandler tells the story: "We thought we could easily start in October and build a 3D printer by Christmas. It didn't quite work out like that. We ordered most of the parts from Chinese suppliers to get everything within the Euro 500 budget that we set for ourselves. Although many of the parts arrived quickly, some of the key items were delayed, and some of the parts were of poor quality so need to be modified or even replaced before the printer could be built.

By week 7, we realized that we could not meet the December deadline. Though we had built something that looked like a 3D printer, and made all the right movements, it didn't actually work.

Finally, the filament melt head failed completely when we were ready to test the printer, so we had to order a UK-built replacement, which would not arrive before Christmas. Not a failure, just another delayed success!"

The 3D printer will be used in the robotics project to build parts for the robots. The students, 80% of whom were beginners in coding, have learned about the components and assembly of a 3D printer, about the importance of its key parts, and also about working together as a team to make a finished product. Now, the working 3D printer can manufacture parts (up to 250 mm in length, height, and width) in a range of thermoplastic polymers.