The Traffic Lights project implemented by Asociația Părinților Ioan Slavici was dedicated to people that are visually impaired, but also to people who are easily distracted. 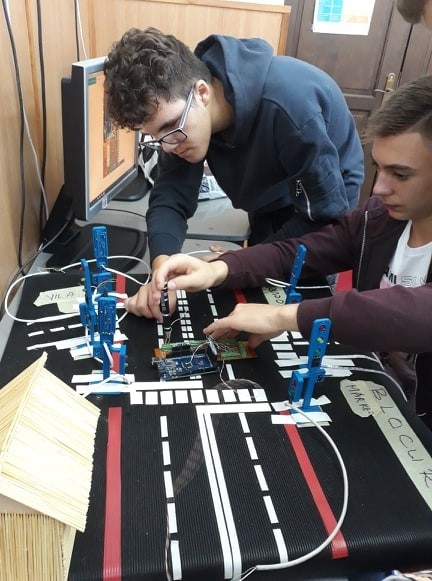 The aim was to promote better traffic safety but also to raise awareness of the needs of visually impaired people for the students.

"For the Traffic Lights project I really enjoyed the idea of helping impaired people, but also the teamwork, that also gave me the possibility of better knowing my colleagues. We’ve learned how to use a new programming language, and this was a challenge for all of us. Creating something from scratch also helped me to build confidence and to pick a career path for the future" Iuhasz BogdanThe students from ninth grade from National College Ioan Slavici in Satu Mare (Romania) learned the basics of Arduino programing language and made a model based on an traffic intersection monitored by traffic lights. It already exists in Satu Mare county, but the students coded it to emit different sounds based on traffic light colors for the visually impaired pedestrians.

Asociația Părinților Ioan Slavici participated in Meet and Code for the second time. They aim to raise and develop the students’ interest for programming and for practical and useful applications. But another aspect is helping the community. While implementing this project, Asociația Părinților Ioan Slavici tried to make the students aware of the needs of visually impaired people.

A great teacher managed to create a team of curious kids, ready to discover new things, to search and find solutions to solve different problems of local society, by using programming. Students involved in the project became more active in the informatics class because they enjoyed seeing their own products being implemented and used.

Students improved their capacity for thinking, reflection, and teamwork. It was a great project experience including brainstorming, negotiations of visions, creating agenda, prioritising steps and goals, documentation, creation and testing products.

"I consider this project as being a good start for my IT career, because I’ve managed to combine the robotics with hardware and software parts into something that can be useful to the community in the day to day life. This project was not only focused on programming, but also building the model from scratch, which also involved thinking and imagination." Dragoș Marian, Meet and Code participant.

It was our second year with Meet and Code. After the first round,  students that were participating in the first events were asking for a new optional class – Robotics. And we started that course in the current school year. We build and programme robots, develop technical creativity and algorithmic thinking by combining the theoretical knowledge with  practical activities.